What is parallel query execution in SQL server 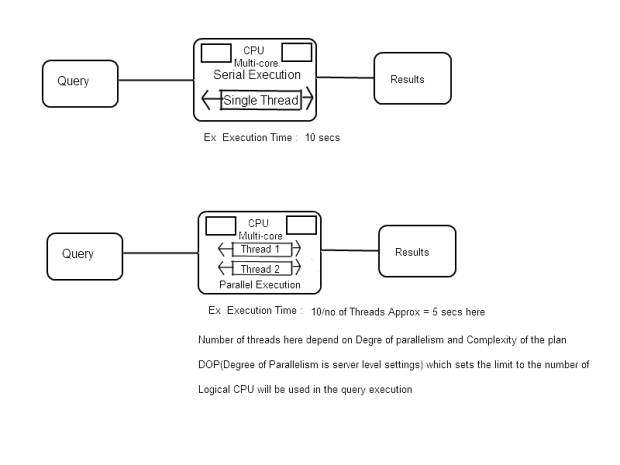 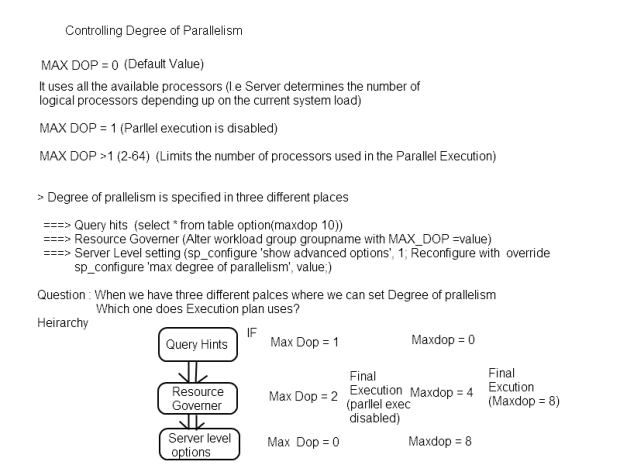 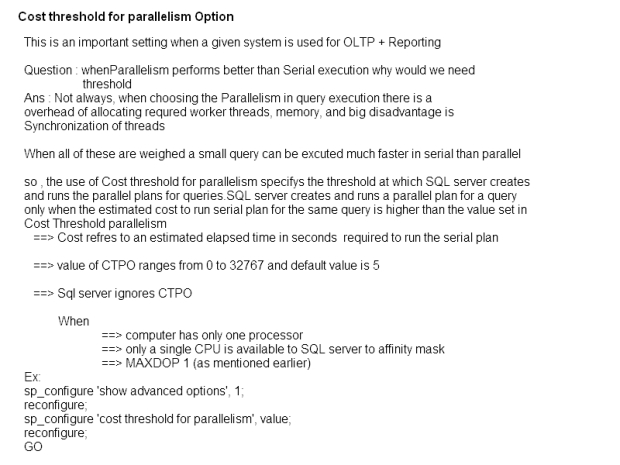 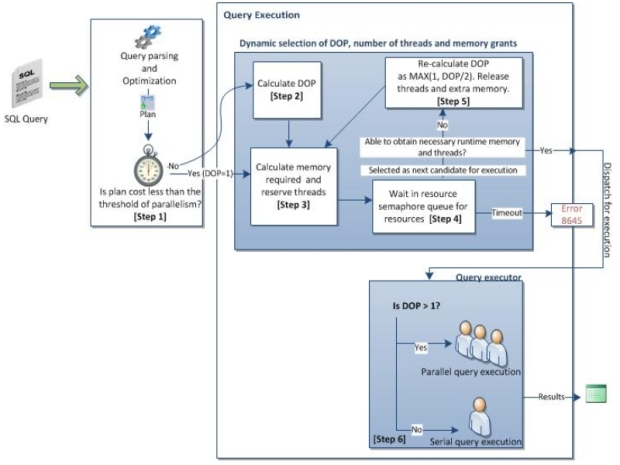 The default value of max degree of parallelism in SQL Server is 0, which is interpreted as follows: If MAXDOP = 0 is used for a query, either via the default or through explicit use of a MAXDOP query hint, SQL Server can potentially use all the processor cores to parallelize a query up to a maximum of 64. For example:

a)      If MAXDOP is set to 0 on a 32 logical processor machine, the maximum degree of parallelism used is 32 unless another value is explicitly specified.

b)      If MAXDOP is set to 0 on a 256 logical processor machine, the maximum degree of parallelism used is 64 unless another value is explicitly specified.

In Step 1, if the MAXDOP value is equal to 1 or if the cost of a query plan is lower than the cost threshold of parallelism, the query optimizer generates a serial plan and the query is executed serially. In the case of a parallel plan, if MAXDOP is set to 0 or to a value greater than 1, the SQL Server query execution engine uses the information from the query plan to calculate an expected degree of parallelism value (Step 2). This degree of parallelism calculation is dependent on the plan shape, the availability of system resources, and the query cost, while honoring the specified MAXDOP value if MAXDOP is greater than 1.

In Step 3, the query execution engine in SQL Server calculates the resources required for a query to execute such as memory and the number of threads. In Step 4, SQL Server uses an internal facility called the resource semaphore to reserve the threads and the memory resources that are required for execution. The resource semaphore ensures that queries are able to satisfy the respective resource reservation values while keeping the overall resource usage within the set limits. First, the memory reservation values for a query are checked to make sure the query needs memory. For example: Simple serial queries without ORDER BY or GROUP BY clauses may not need a memory grant, and in such cases the query is dispatched for execution immediately. Next, SQL Server examines the maximum memory limit for a particular query. This value can be configured through the Resource Governor workload group REQUEST_MAX_MEMORY_GRANT_PERCENT value. If the memory grant request can be met (that is, if the memory grant request value is less that the per-query maximum limit) and the required thread resources can be obtained, the query is executed immediately. After a query is dispatched for execution, the degree of parallelism cannot change.

Lets do some tests with max dop 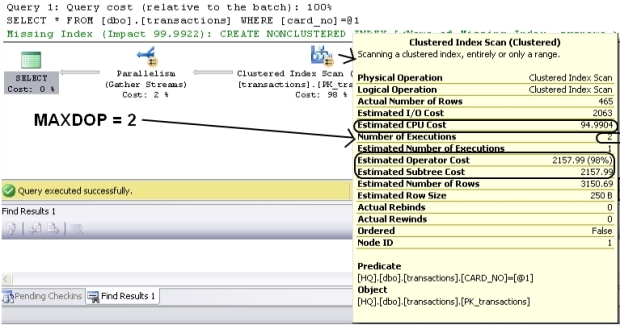 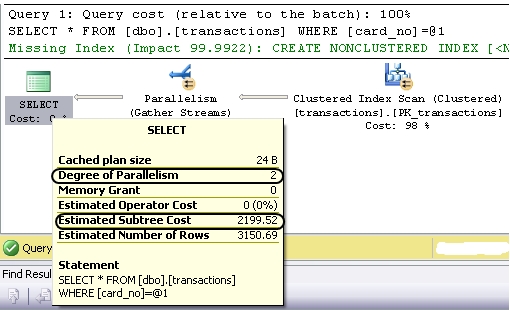 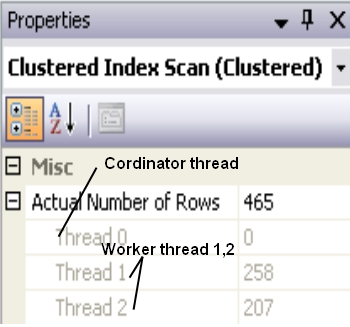 Now lets disable the MAX DOP and see the diffrence 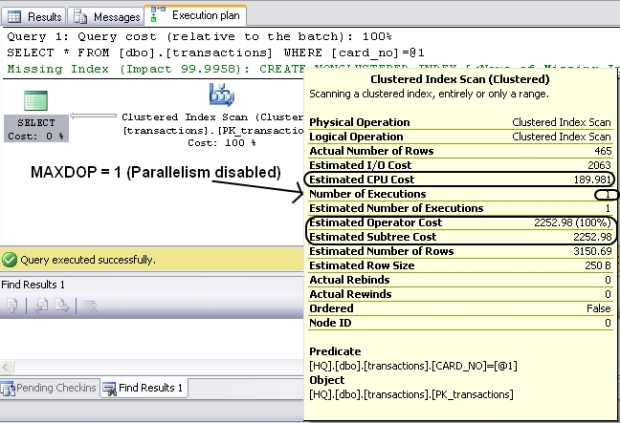 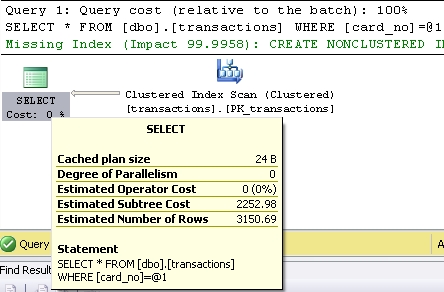 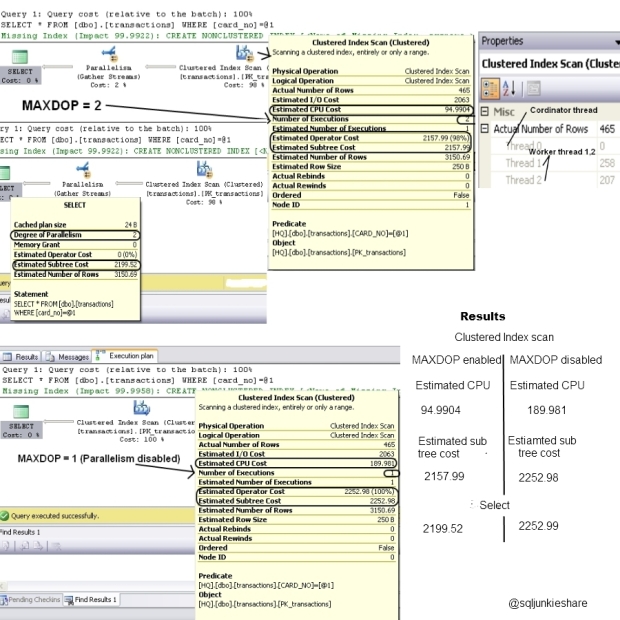 Depending on the degree of parallelism value and the different possibilities of data flow and execution order in a parallel query plan, the number of threads calculated by the query execution engine for running a query is estimated

The synchronization between producer and consumer threads seems to perform well. However, there are cases (for example, when either the producer or consumer thread is waiting for a resource such as I/O, CPU, or memory grants) in which excessive CXPACKET waits can occur. Other possible causes for high CXPACKET waits are underestimation of the number of rows flowing through an operator and highly skewed data

Start with the default value of MAXDOP and reduce it only if you identify performance problems. A good approach is to progressively test with powers of two values. If you only have one or a few concurrent queries running, the default for MAXDOP (0) will often be optimal. Following are some techniques you can use to understand problems related to parallel processing in SQL Server and tips for mitigating them.

(1)    If you observe excessive CXPACKET waits, reduce the value of MAXDOP:

(4)    If you are observing what appears to be a suboptimal query plan due to cardinality estimation errors, consider updating table statistics using the guidelines in [4].

(5)    Consider rewriting some queries so that they perform well in parallel environments using the guidelines in [2].